Route 101 is the Houston based tribute to Depeche Mode fronted by lead singer, Christopher Anton of christopher ANTON and the Joneses (band) and former vocalist of the Iconic 80’s Synth Pop Band, INFORMATION SOCIETY,
The band features members:
Thomas Brigham (keyboard/guitar/vocals), Marco Digges (keyboard/vocals) & John Boyd (keyboard/guitar/vocals).
The band is a revival and nod to ANTON’s previous & successful L.A. based DM tribute, 101.
Route 101's mission is to present a “best of” format of songs to Depeche Mode fans everywhere placing an emphasis on early years of DM.

Anton describes the project as “coming from a place of love and respect...to present the songs that the fans love with dignity and sincerity.”

Route 101 plays the hits that every fan wants to hear, Personal Jesus, But Not Tonight, World In My Eyes, Shake The Disease, just to name a few from the band's repertoire.

June 18, 1988 was a day to remember for the 60,453 fans that attended the Rose Bowl in Pasadena California. Depeche Mode played their ground breaking one hundred and first concert of the “Music for the Masses” tour. The concert was a tremendous success and was followed by the release of the film “101”, a documentary based on the tour. “101” was also released as a two part live CD from the Rose Bowl concert. The success of the event was a testament to the growing vitality of electronic music in the main stream. Dubbed as “The Concert for the Masses” this legendary performance by Depeche Mode is often regarded as Depeche Mode’s defining moment.

Fast-forward twelve years to the year 2000…. Los Angeles, California Adolfo Valencia a.k.a. “VICIOUS” decided to put together a tribute to his favorite band of all time, Depeche Mode. Paying homage to the "Concert for the Masses” he named the group "101". After various incarnations of the group it was apparent that the band needed a DM influenced vocalist to solidify the act. 101 placed an advertisement in a local Los Angeles magazine to find a lead singer. There were many responses to the ad, dozens of auditions. One candidate was chosen.

Christopher Anton had been forging new ground on the Los Angeles music scene with his new wave/modern rock band Pseudocipher. In March 2003 Christopher discovered the advertisement placed by 101, “Lead Vocalist Wanted for Depeche Mode Tribute Band”. Being heavily influenced by DM and a true fan, he decided to audition for 101. Chris's vocal abilities, comparable to Dave Gahan, his charisma on stage, and his passion for DM, impressed the band, and won him the role of front man for 101 in March of 2003.

Since December of 2000, 101 has performed all over L.A. County for eager screaming DM fans everywhere. With a huge draw of up to 600+ fans, 101 is Southern California's most successful Depeche Mode Tribute Band, performing songs on demand. Hits performed include Personal Jesus, Fly on the Windscreen, It’s No Good, Question of Time, Halo, Get the Balance Right, Policy of Truth, Never Let Me Down Again, Rush, Just Can't Get Enough, Enjoy the Silence, I Feel Loved, Everything Counts, Walking in My Shoes, Shake the Disease, and many more. 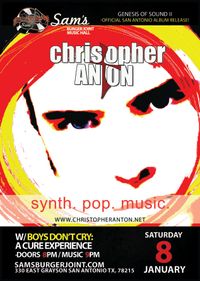 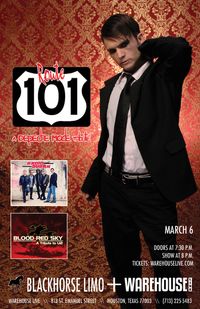 ON SALE JAN. 1: JetSpeed Music, Blackhorse Limo Concert Series & Warehouse Live present Route 101 -A Tribute to Depeche Mode, Radio Duran - A Tribute to Duran Duran and Blood Red Sky - A Tribute to U2, all on March 6. Get your tix at WarehouseLive.com! 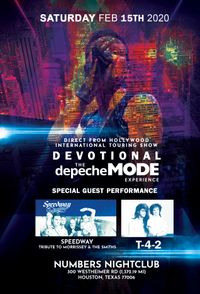 Live In Concert at Numbers NightClub

We book the very best in Tribute Acts for your Viewing and Listening Pleasure! 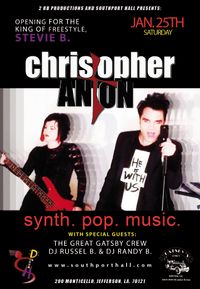 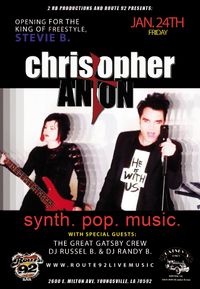 Hey Louisiana - We're opening for The King Of Freestyle Stevie B. - Friday January 24 At Route 92 -With Special Guest The Great Gatsby's Crew!! 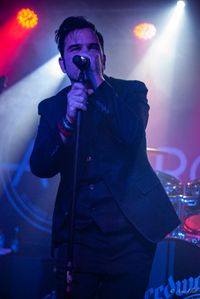 Get ready for some awesome 80’s music & great food!! Weather looks to be great! 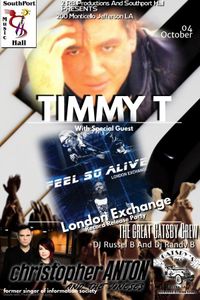 THE 2RB Productions & Southport Hall are bringing you Back in the Day-------GATSBY'S STYLE!!!!!!!!!!!!!! LIVE IN CONCERT TIMMY T with Special Guest London Exchange (hosting their record release party of Feel So Alive) and Christopher Anton and the Joneses (formally of Information Society). Make sure you reserve your VIP seats for this special event.
Doors open at 8:00 pm and our show starts for 9:00 pm. Go to https://southporthall.com/ to purchase your tickets. 1st 100 who purchase will get the special rate of $20.00. $25.00 online after the promo and $30 the night of the event. REMEMBER-----WE PARTIED AT NIGHT AND SLEPT ALL DAY. 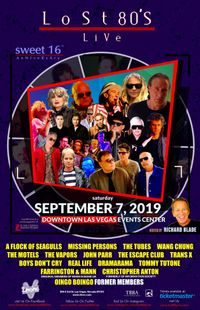 Get Lost in the 80’s when Lost 80’s Live Returns Saturday September 7, 2019 to the Downtown Las Vegas Events Center Las Vegas, NV for our Sweet 16 Anniversary 80’s Flash Back Concert! 16 Bands on on stage and Special Act to be Announced at a later date. Hosted by Richard Blade of sirius xm 1st wave and KROQ 106.7 fm Radio Fame. 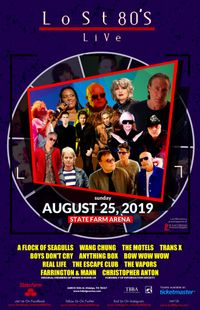 A FLOCK OF SEAGULLS “I Ran“, “A Space Age Love Song” THE MOTELS “Only the Lonely“, “Suddenly Last Summer” WANG CHUNG “Every Body Have Fun Tonight“, ” Dance Hall Days” FARRINGTON + MANN ORIGINAL MEMBERS OF WHEN IN ROME UK “The Promise“, “Heaven Knows” THE ESCAPE CLUB “Wild, Wild West“, ” I’ll Be There” THE VAPORS “Turning Japanese“, “Jimmie Jones” BOW WOW WOW “I Want Candy,”Do Ya Wanna Hold Me” REAL LIFE “Send Me An Angel“, “Catch Me I’m Falling” TRANS X “Living On Video“,”Message On The Radio” BOYS DON’T CRY “I Wanna Be a Cowboy” ANYTHING BOX “Living In Oblivion“,”Kiss Of Life” Christopher Anton formerly of Information Society 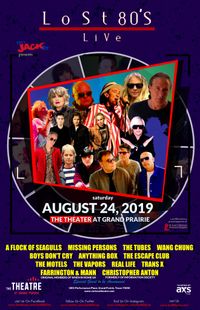 Get Lost in the 80’s when Jack 100.3 FM DFW presents the return Lost 80’s Live Saturday August 24 at the Theater at Grand Prairie, Grand Prairie Texas for an unforgettable 80’s Flash Back Concert

A FLOCK OF SEAGULLS “I Ran“, “A Space Age Love Song” MISSING PERSONS “Walking In LA“, “Words” THE TUBES “She’s A Beauty“, “Talk to Ya Later” THE MOTELS “Only the Lonely“, “Suddenly Last Summer” WANG CHUNG “Every Body Have Fun Tonight“, ” Dance Hall Days” FARRINGTON + MANN ORIGINAL MEMBERS OF WHEN IN ROME UK “The Promise“, “Heaven Knows” THE ESCAPE CLUB “Wild, Wild West“, ” I’ll Be There” THE VAPORS “Turning Japanese“, “Jimmie Jones” REAL LIFE “Send Me An Angel“, “Catch Me I’m Falling” TRANS X “Living On Video“,”Message On The Radio” BOYS DON’T CRY “I Wanna Be a Cowboy” ANYTHING BOX “Living In Oblivion“,”Kiss Of Life” Christopher Anton formerly of Information Society

SPECIAL GUEST TO BE ADDED! 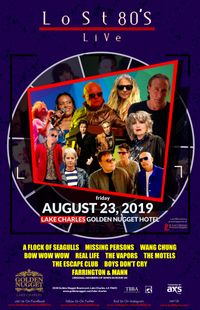 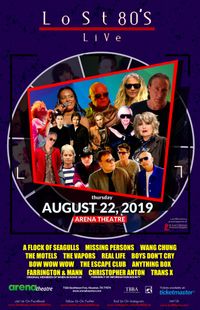 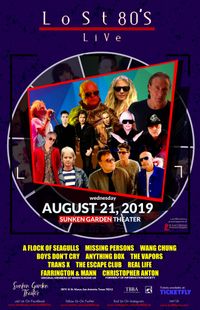 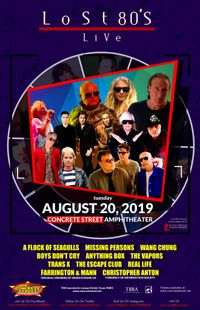 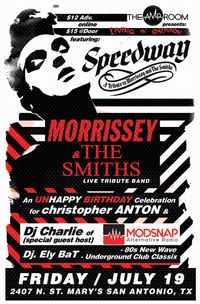